Taking in the sites of the Derrygimlagh and Roundstone Bogs, cyclists will see the site of the crash-landing of the first transatlantic flight by Alcock and Brown in 1919 and also The Marconi transatlantic wireless station. Passing by some stunning beaches including Coral Strand and Dogs Bay, cyclists will want to stop to breath in the Atlantic sea air before arriving in the fishing village of Roundstone.

Overlooking Clifden Bay to the South and Streamstown Bay to the North, this route rises more than 150 m above sea level and has spectacular views of the Atlantic, the islands of Inishturk, Turbot and Clifden town. You will also see the ruin of Clifden Castle, former home of John D’Arcy who founded the town at the start of the 19th century. The terrain is relatively flat towards the end of the peninsula. Cyclists follow the coastline of the tranquil Streamstown Bay back towards the main road.

The old Galway-Clifden railway line has opened up a 6km route for cyclists and walkers to enjoy. Tucked away off the grounds of the stunning Ballynahinch Estate, the Connemara Greenway (which is hopeful to continue expanding) is ideal for those looking for an easy route away from the main roads.

This trail offers mountain bikers technical, rocky andf terrain which is exposed to mud, loose gravel and elevated timber boardwalks. It is a circular marked loop trail with over 13km of single track offering views both into Maam valley and of Lough Corrib and is located 7km west of Oughterard.

One of the shorter loops to do. Passing by the Owenglen Cascade and taking the steady hill to enjoy the views of Clifden Bay. A signpost indicates where The Alcock and Brown monument is which a magnificent panoramic viewing point.
Please note: water and stones are themes of this circuit which is typical of the rocky landscape here in parts of Connemara.

The annual Skoda Tour de Connemara takes place every May and offers its participants the choice of an 80km or 140km route through Connemara’s picturesque landscape. The event starts and ends in Clifden and welcomes cyclists through the beautiful communities of Connnemara including Ballyconneely, Roundstone, Cashel, Carna, Killkieran, Maam Valley, Leenane, Recess, Kylemore and Letterfrack.

Find out more about the event on their website https://tourdeconamara.ie/

Founded in 1973, the Connemara Championship Golf Links has been voted the Best Links Course in Connaught a number of times and offers avid golfers a course with dramatic coastal views showcasing the rugged countryside which is steeped in history and wildlife. Visitors are welcomed all year around but booking is essential.

With views of Galway Bay, the Burren and the Aran Island, the Bearna Golf Club is within 10km to Galway city. Surrounded by Irish bogland, the course has a number of tricky characteristics to test all experienced golfers.

Located just outside Oughterard village, this 18-hole championship course lies along the tranquil Lough Corrib and is surrounded by native Irish trees, water features and sand bunkers to ensure you have a course experience to remember.

The Connemara Isles Golf Club is located on Annaghavane Island which lies on the edge of the Atlantic Ocean. The 9 hole course is surrounded by the amazing views of south Connemara like Cill Chiaráin Bay and Cnoc Leitir Mór and each hole has its own unique signature which all level of golfers can enjoy.

There’s so much to sea and things to do in Connemara!

Use our interactive map to find out more information on the many attractions the region has to offer..

For less experienced walkers and families, the Diamond Hill Trail in the Connemara National Park is well sign-posted and highly accessible, and those who make it to the top are rewarded with expansive panoramic vistas across Connemara.There are four trails in Connemara National Park. A Must when you visit Connemara. There is also a lovely coffee shop and great playground for the kids... Read More >>

Electric and Hybrid Bike Hire and Tours – Roam the highways and byways of Connemara at your leisure. Make molehills out of those mountains, cruise gently along the bog road, and strike out those quite, secluded beaches that are now within easy reach! Read More >> 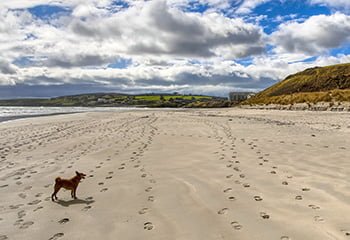 Imagine driving along the absolute edge of Western Europe, Imagine exploring a 2,500km (1,553 miles) long coastline dotted with beaches, harbours, headlands and stunning viewing points, imagine stopping yourcar, feeling the salt spray in your face and the exhalation of Atlantic surf. You can do it all and more on the Wild Atlantic Way… a journey of inspiration! Read More >>

Connemara is surrounded by rivers and lakes that is home to world-class brown trout and the majestic Atlantic Salmon. Read More >>

No visit to Connemara would be complete without a visit to Killary Fjord. The nine mile long inlet boasts some of the finest scenery in the West of Ireland, and because of its sheltered nature, its waters are always calm. Read More >>

Two miles from Roundstone, on the road to Clifden, are two of the finest beaches in Ireland. Gurteen Beach and Dog’s Bay lie back to back forming a tombolo jutting out into the Atlantic Ocean. Read More >>

Connemara offers many shops to enjoy, whether you're browsing for a special gift, or looking for a souvenir, or just treating yourself... See what's near to where you're staying...
Read More >>

Have any questions? Get in touch today!

Check out our Special Offers!